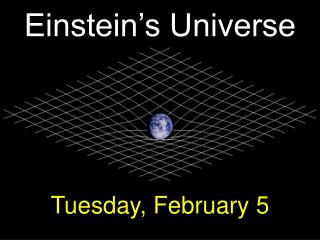 Einstein’s Universe. Tuesday, February 5. Einstein – Newton smackdown!. Two different ways of thinking about gravity and space . The Way of Newton:. Space is static (not expanding or contracting) and flat . (“ Flat ” means that all Euclid’s laws of geometry hold true.). Einstein Said… - . “…imagination is more important than knowledge. for knowledge is limited to all we now know and

To Infinity – and Beyond! - . ian morison gresham professor of astronomy. to infinity – and beyond!. the origin and

Marketing Fundamentals CUSTOMER-DRIVEN - . einstein created his theories not from experiments, but from thought problems.

Cluster Fukushima - . &quot;only two things are infinite: the universe and human stupidity. and i'm not certain about

Cluster Fukushima - . &quot;only two things are infinite: the universe and human stupidity. and i'm not certain about