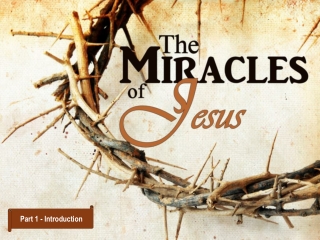 Part 1 - Introduction. “You men of Israel, hear these words; Jesus of Nazareth, a man approved of God among you by mighty works and wonders and signs, which God did by Him in the midst of you, as you yourselves also know” Acts 2:22. Miracle. Bible Definition.