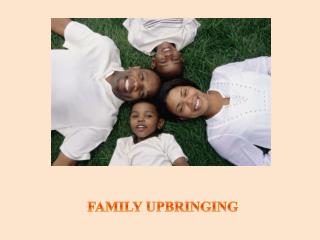 FAMILY UPBRINGING. Our family. The family is the basic social unit in most societes. Ideally, it provides its members protection, love, warmth, care, tenderness and so on. The structure of the family is various. Multicultural upbringing: - . a response to the modern society

Muslim Upbringing And Belief In Allah(SWT) - . unit 4 section one: believing in allah(swt) section: 1.1 . glossary . a

FAMILY-TO-FAMILY INTRANET - . what is f2f intranet?. an internal site within nami’s website. created as a technical

Family and Family Relationship - . have you got a brother?. brothers/sisters play with each other (don’t ) get on

Family Systems, Family Lives - . the family. institution: maintains patterns of privilege and inequity and is connected

Family - My world. traditions. family. hobbies. friends. pets. likes and dislikes. my world is all i like and dislike,