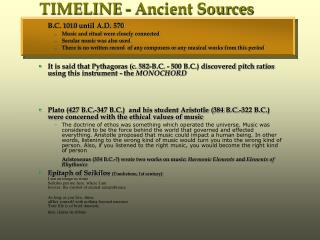 TIMELINE - Ancient Sources. B.C. 1010 until A.D. 570 Music and ritual were closely connected Secular music was also used There is no written record of any composers or any musical works from this period

Occupational Radiation Sources - . sources of contamination. objectives. list the origins for sources in a nuclear power

Ancient Sumerians - . situated between the tigris and euphrates in the heart of modern-day iraq on a dry, flat, hot

Old Testament Timeline - . benjamin s. heath. “to every thing there is a season , and a time to every purpose under the