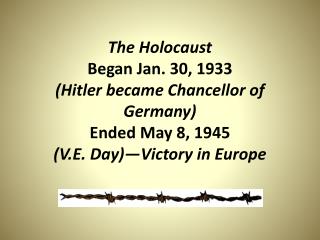 The Holocaust Began Jan. 30, 1933 (Hitler became Chancellor of Germany) Ended May 8, 1945 (V.E. Day)—Victory in Europe Holocaust (Shoah) •means the complete destruction of a large number of persons •in Hebrew = “a great and terrible wind” • The definition you must know: The

The Holocaust: An OVERVIEW - . two german jewish families at a prewar gathering. only two of them survived holocaust.

WRITING FOR RADIO - . radio in india. experiments began in 1915. broadcasting began in india with the formation of a

The Holocaust: Rescuers &amp; Survivors - . by: stephanie. swbat: questions students be able to answer…. who were

L-5 - . endoscopic procedures. endoscopy. the use of fiber-optic scopes for the purpose of examination, diagnosis, and