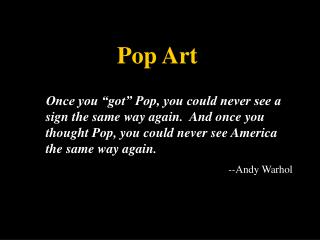 Pop Art - . an art movement and style that had its origins in england in the 1950s and made its way to the united states

Pop Art - . created and presented by ms. steinmetz. what is pop art?. fascinated with mass-produced visual commodities of

POp Art - . richard hamilton. hamilton, just what is it that makes today’s home so different, so appealing ?,1956. andy

POP ART - . the title of this art movement comes from the word popular – as in popular music, or pop music. pop art

Pop Art - “everything is beautiful. pop is everything.” -andy warhol. pop art . by: jennifer sika. 1. beginnings.

POP ART - . form. form refers to an element of art that is three-dimensional ( height, width , and depth) and encloses

POP ART: mass culture, advertising, comic books! - Pop art  is an  art movement  that emerged in the mid-1950s in