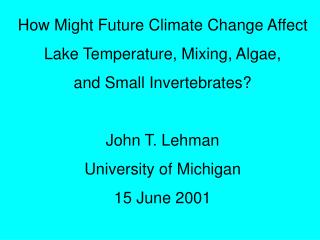 How Might Future Climate Change Affect Lake Temperature, Mixing, Algae, and Small Invertebrates? John T. Lehman University of Michigan 15 June 2001 Climate Change and the Great Lakes What types of Ecological Knowledge do we need to understand and predict the effects of climate change?

Global Environmental Change: Technology and the Future of Planet Earth Where will all the heat go? - . outline. evidence

Chapter 20 - . climate change and ozone depletion. chapter overview questions. how have the earth’s temperature and

Applying the 5 E Pedagogy to the Climate Change Lab - . we have been doing this for how long?. essentially three labs

Climate Change and Ozone Depletion - Chapter overview questions. how have the earth's temperature and climate changed in