How does a glider take off ? - PowerPoint PPT Presentation 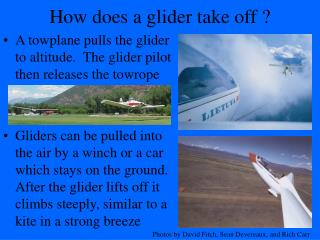 How does a glider take off ?

How does a glider take off ?. A towplane pulls the glider to altitude. The glider pilot then releases the towrope Gliders can be pulled into the air by a winch or a car which stays on the ground. After the glider lifts off it climbs steeply, similar to a kite in a strong breeze.

How does a glider take off ?

Basic Principles of Airmanship Gliding - . objectives. know the 2 types of glider used by the atc describe 2 methods of

FLIGHT VOCABULARY - . fluid. having particles that easily move and change their relative position without a separation of

Pre Flight Checks - . before getting in the glider:. assess the conditions and your landing options in case of a launch

Wings Program - . loss of directional control in takeoff &amp; landings are #2 &amp; #1 in order of aircraft

What goes on at the Gliding Site on an average day? - . glider ops staff members

BIRD’S AERODYNAMICS - . abstract. man has always dreamed of being able to fly. our long years of experiment and

GLIDERS - . tall enough to reach one at a time on each glider north to south one person on black step. circle bars. one