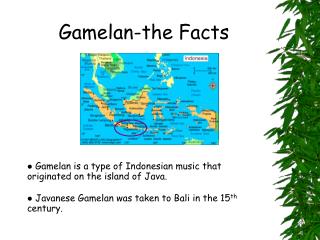 Gamelan-the Facts. Gamelan is a type of Indonesian music that originated on the island of Java. Javanese Gamelan was taken to Bali in the 15 th century. . Map. Gamelan-the Facts. There are two main types of Gamelan, Javanese and Balinese.

Magazines ……the facts - . 44 magazines sold every second of the year consumer spend exceeds £2billion and has

The Facts - . nearly 3 million australians currently live with anxiety and/or depression . 40% of australians with

DISTANCING THE FACTS - . distancing the fact . seem / appear: we often use seem and appear to give information without

The Facts - . women are twice as likely to consume chocolate as men average britian consumes 3 chocolate bars per day

The hog facts - . by courtney brown . history on hogs. there are currently 23 species of hog in the world the ancestors

Report for Gamelan - . by : abelhard. balinese people have very good sense in music. not only in sustaining their life

Javanese Gamelan - . by : natasha and permata. introduction of the gamelan. gamelan is a type of traditional indonesian.

HIV: The Facts - . you each have a card with directions on it. the people who have card 1 must wear a latex glove on one

The Whisky Facts - The

The Facts - . every year, about 70 people are killed and 2000 seriously injured in accidents involving vehicles in and

The FACTS - The american worker has the least vacation time of any modern, developed society . source: career builder.