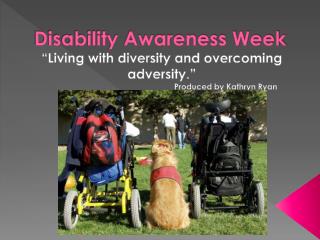 Disability Awareness Week “Living with diversity and overcoming adversity.” Produced by Kathryn Ryan Knowledge is the antidote to fear. - Ralph Waldo Emerson Definitions… Handicap: A situation or barrier imposed by society, the environment, or oneself.

Learning Disability Awareness - . click here to start. what is a learning disability?. the government white paper

disAbility Awareness Challenge - . 2010. dedicated to david s. davies. dave davies, one of the founders of the dac,

Disability Awareness : The Basics - . goals of today’s presentation. leave you with a better understanding of the