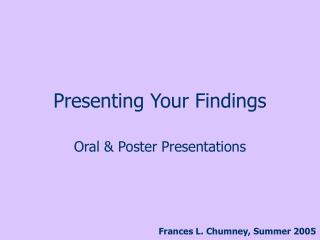 Presenting your proposal - . damian gordon. introduction. communication is key to sell the merits of your project

How to Prepare for a Poster Presentation - . shared by kari kokka and lizzie adelman ( edd d2 students) materials from

Topics Discussed Objective of study and this talk. Methods. Summary of findings.

Reporting your Findings- What does it take to clear the “peer-reviewed” hurdle? - Die 4564 research methods week 3

Presenting Your Research as a Poster - . typical poster sections. title banner. same as the one submitted for the

The How To of Digital Poster Presentations - My books- learning to go https://gumroad.com/l/learn2go & the 30 goals