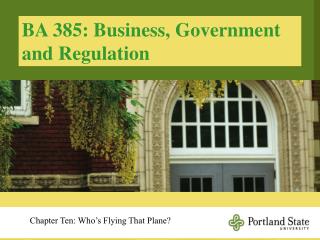 BA 385: Business, Government and Regulation Chapter Ten: Who’s Flying That Plane? Introduction to Chapter Ten The chapter examines the relationship between business and government and in particular the government’s role in influencing business decision making.

GOVERNMENT REGULATION OF THE WORKPLACE: Background - . employees are the most important resource for most firms in the

Globalization or Marginalization? The Place of Tanzania in the ‘Global Village’ - . chambi chachage. what is

What is Government? - . lesson 6: what is the best economy?. what are the factors of production? how can we describe the

Operations Strategy for Competitive Advantage - . chapter 2. what is regal marine?. regal marine was established in 1967