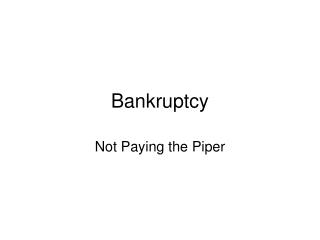 Bankruptcy. Not Paying the Piper. Corporate Bankruptcy Facts. In March 2003, PWC forecasted that around 10,000 companies would file for Chapter 11 protection that year, down from a record 11,000 in 2002.

Bankruptcy Law and Practice in the Kingdom of Thailand - . presentation for the 78th annual meeting national conference

True or False? - Money 2004 made available to the care program courtesy of carol kenner, retired bankruptcy judge from d.