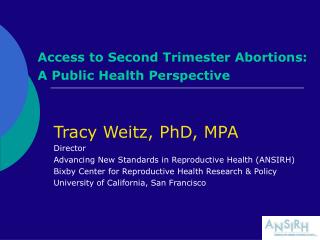 Improving Access to Credible and Relevant Information for Public Health Professionals - . a qualitative study of

Public Health - . 20 th century public health. describe the origins of public health policy in the uk from the 20 th

A Perspective from the Public Health Program of the - . college of health sciences american university of armenia.

Abortion - . olivia nall &amp; mark pantle. what is abortion?. abortion is the intentional termination of a