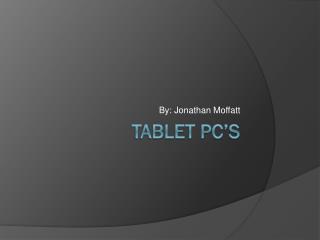 By: Jonathan Moffatt. Tablet Pc’s. What is a tablet PC?. Medium sized mobile computer that is integrated with touch screen or stylus Has storing capabilities, internet access and allows the owner to control what is installed . History. instructor with Tablet PC - Ken yasuhara: important setting for printing for pdf distilling (and probably best to do for