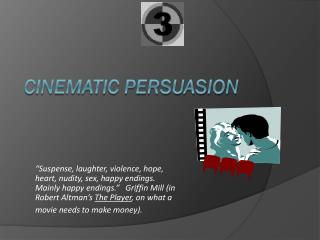 “There Will Come Soft Rains” - . by: ray bradbury. some terms you need to remember:. setting -  includes

Laughter - . the definition, examples and usages of 14 words relating to laughter. smile: to have and make expression of

Cinematic - . the games opening and ending is in a story book format with a voice over telling the story all other

Portrayal of Women in Media - . women. as we unfortunately see in all forms of media, the roles of women in advertising

Persuasion - . how to get people to do what you want. yipsir www.yipsir.com.hk. schedule. definition of persuasion routes

The Future and past and Present Of Media Education - . holly willis • school of cinematic arts • usc • ufva