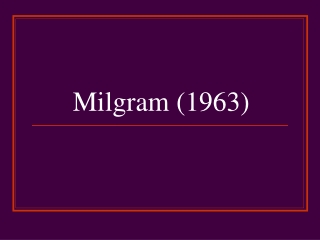 Milgram (1963). Miss lessons Hit a stranger Hand over money Lie on the pavement Steal something Stand on one leg Kill a stranger. A friend A teacher A policeman A man in a lab coat The headmaster A stranger A man in an army uniform A sports coach. How far are you willing to obey?.