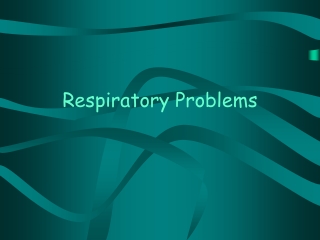 Respiratory Problems. HICCUPS. Diaphragm, the muscle below your chest cavity, sudden jerks and you find yourself sucking in air quickly. The air flow causes the epiglottis to snap shut, which makes the “hiccup” sound. SNOT AND BOOGERS. Snot  Mucus! RESPIRATORY EMERGENCIES - . respiratory emergencies objectives. upon completion the student will be able to: identify the

Respiratory System - . outline. the respiratory tract the nose the pharynx the larynx the bronchial tree the lungs gas

Respiratory infections - . maisa mansour , md faculty of medicine respiratory department . why is this important?. the

Assessment of Respiratory Function - . prepared by dr. iman abdullah. out line. anatomy of the upper and lower

RESPIRATORY OBJECTIVES - . upon completion of this lecture, you will be better able to: define the most common types of

The Respiratory System - . md 10.01 describe the structure of the respiratory system md 10.02 analyze the function of the