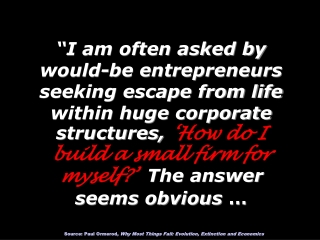 “ I am often asked by would-be entrepreneurs seeking escape from life within huge corporate structures, ‘How do I build a small firm for myself?’ The answer seems obvious … Source: Paul Ormerod, Why Most Things Fail: Evolution, Extinction and Economics. LONG Excellence. Always. Corporate Governance and the Board -- What Works Best - . financial executives summit scottsdale may 7, 2001 richard m.

Identity and Context Virtualization The Key to Your IdM Architecture - . “everything you know about idm is wrong”