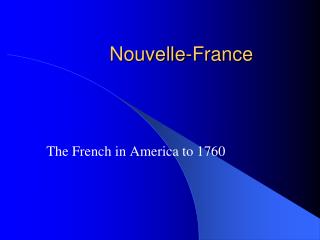 The French in America to 1760. Nouvelle-France. Nouvelle-France. Why did the French and other Europeans come to North America and how did they interact with the First Peoples?. Introduction. 15 th century navigation- pioneer sailing routes to Asia and America

the Fall of New France - . the 7 years war. conflict: france vs. britain . conflict over control of the fur trade

Fall of New France - . curse you mercantilism. the theory of mercantilism led to the inevitable war between britain and

Where is Vietnam? - . history. conflict between france &amp; vietnam. the vietnam war grew out of the long conflict

My Trip to Paris, France - . by: kristin gable. fall 2013. overview. the reason that i chose to go to paris, france on my