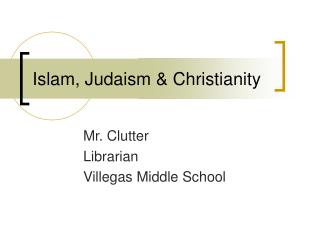 ISLAM - . these slides are prepared by dr. peter vardy of heythrop college, university of london, to assist teachers in

Understanding Islam - . why spend time studying islam?. islam is the second largest religion in the world islam is the

A Brief Guide to Judaism - A curriculum support presentation for the study of the holocaust. created by the birmingham

JUDAISM, CHRISTIANITY, AND ISLAM - . judaism. hebrew is the sacred language god is called adonai synagogue is the holy

Judaism - . judaism: an introduction. one of the oldest major religions christianity and islam developed from judaism

Judaism - . beginning of judaism. judaism is the oldest of the world's major monotheistic religions, originating in