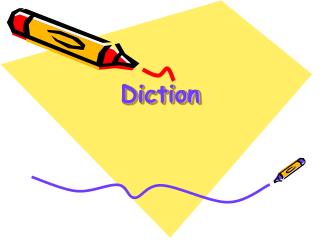 Diction - . literature and the choice of words. diction. words have three levels, and are selected based on their

Diction - . a word’s denotation is its dictionary definition. a word can also make people feel or think a certain way.

Diction - . whenever you think of diction , you’re thinking about word choice . so, you can’t write, “the

DICTION: - . the choice of words. who is your audience? what is your purpose?. your goal: to find the exact word that

Diction - . by 陈烽. levels of words the meaning of words general and specific words idioms dictionary. levels of

Diction - . what is diction?. diction is the author’s choice of words. for instance, while saying “the girl wants

Diction - . hopefully, imply versus infer , irregardless , and in regards to from the uwf writing lab’s 101 grammar

Diction - . exercises. 1. as i watched, the sun broke weakly through, brightened the rich red of the fawns, and kindled

Diction - . a guide to a few words that are commonly misused. accept except. “accept” means to agree or to take

Diction - . say what you mean and mean what you say. diction. is at the heart of any discussion about style =word choice,

Diction - Accept except. ?accept" means to agree or to take something that is offeredi will accept his

Diction - . objective: identify literary elements. diction. the words an author (or you as a speaker ) chooses to use.

Diction - . how the words you use in your essay effect your persuasiveness. vocabulary of issue. the discourse of your

Diction - . how the words you use in your essay effect your persuasiveness. vocabulary of issue. the discourse of your

Diction - . the author’s choice of words. meaning. words have two ways to communicate meaning: denotation the