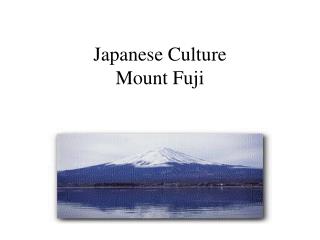 Japanese Culture Mount Fuji. Samurai sword. Samurai. Professional Japanese warriors who swore absolute loyalty to their overlord and practiced BUSHIDO or THE WAY OF THE WARRIOR, a code of behavior based on honor. Ronin were unemployed Samurai. Samurai Armor. Shogun-Military leader of Japan. MOUNT FUJI - . mount fuji was there ready to erupt but nobody new what was happening but only one man did. how it all

Mount Fuji - . by: krysta miller. before and after. mount fuji is famous for its perfectly symmetrical cone. . the last

Japanese Culture - . warm-up. question 1: please look around and tell me where we are. question 2: have you ever been to

Japanese Culture - . by grace williamson. shintoism. “shinto” means “the way of the gods”.

JAPANESE CULTURE - . japanese flag. japan is below russia, china, north and south korea. the island of japan is almost as

JAPANESE CULTURE - . japan. japan is an island . the capital of japan is tokyo it’s a very small but a very crowded

Japanese Culture - . jay kim. factor 1: geographical isolation. japan is a group of islands isolated from a mainland so