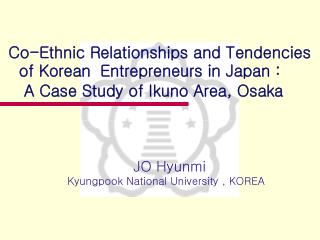 Co-Ethnic Relationships and Tendencies of Korean Entrepreneurs in Japan :

Co-Ethnic Relationships and Tendencies of Korean Entrepreneurs in Japan :

The Cultural Environments Facing Business - . 2-1. cultural literacy detailed knowledge of a culture that enables a