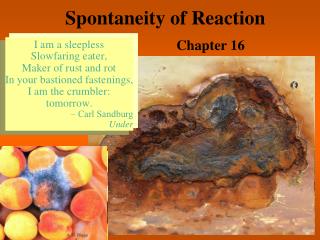 Reaction Spontaneity - . how can a fire start on its own? (without a spark). spontaneous reaction. occurs naturally and

Spontaneity - . ib chemistry hl. in this part of energetics we learn: predict whether a reaction or process will be

Spontaneity - . i am a sleepless slowfaring eater maker of rust and rot in your bastioned fastenings, i am the crumbler:

Spontaneity of Reactions &amp; - . free energy is the energy that is available to do work. d g= d h- t d s. free

Thermodynamics and Spontaneity - . spontaneous change : the direction of change that does not require work (outside

V. Determining Spontaneity - . it would be easier if we could determine spontaneity by just considering changes in the

Metabolism and Spontaneity - . chapter 6 section 2 ann, kameron, and maddie. what is a spontaneous process?. a process

4 Benefits to Spontaneity - When you allow yourself to become spontaneous, you will explore new things to enjoy, which