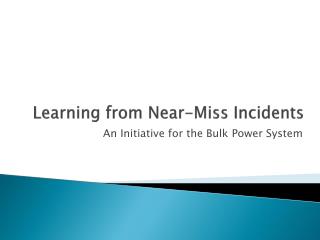 Learning from Near-Miss Incidents - . an initiative for the bulk power system. source: wiegmann , d.a. and shappell ,

Near Miss - . most hazards are assigned and corrected within two days. hazard reviewed for underlying issues and risk

Near Miss Reporting Ian Harper - . a definition? . an event that occurred that did not, for any reason, cause loss.