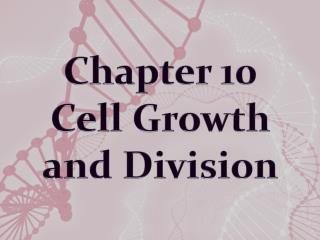 Chapter 10 Cell Growth and Division . Limits to Cell Growth. The larger a cell becomes, the more demands the cell places on its DNA and more trouble the cell has moving enough nutrients and wastes across the cell membrane. Growing Cells. 1 µ 2µ 3µ Chapter 5 Rooms Division Operations - . after reading and studying this chapter, you should be able to:. outline the

The Cell Chapter 6 - . how do we know about cells?. microscopes: windows to the world of the cell. the discovery and

The Cell Theory - . a. all living organisms are made up of one or more cells b. the cell is the basic unit of life c. all