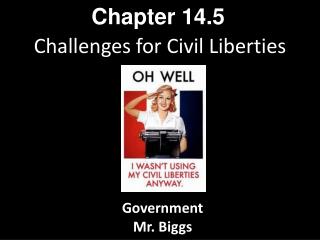 Responses to Attacks on Civil Liberties - . the roaring 20’s. pair-share:. what events, interests, and philosophies

New Approaches to Civil Rights Chapter 26 Section 3 - . affirmative action. the call for companies who work with the

Fundamental Freedoms - Section 1: freedom and the bill of rights section 2: freedom of religion section 3: freedom of

Chapter 21: Civil Rights - . in the name of love. taking on segregation: section one. the segragation system 1896 plessy

New Challenges to Civil Rights - . in the mid to late 1960’s, the struggle for civil rights shifted to the north

Civil Liberties and the 1 st Amendment - . the bill of rights and the state. barron v. baltimore (1833) while the bill of

Yeah So About Civil Liberties - . freedom of religion in the first amendment by daniel wolfe and alex sutton. the first