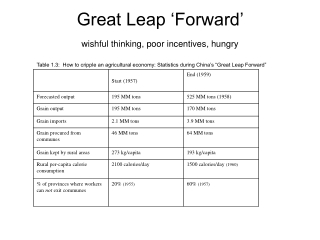 The Very Hungry Caterpillar - . by eric carle. in the night, there was one little egg laying on a leaf. one sunday

LEAP - . louisiana educational assessment program. what is leap?. the leap test is given to all 4th and 8th graders to

“The Great Leap Forward …” - . the “great leap forward” is the term used to describe china’s aspirations to

Are You Thinking? - . building connections: community leadership program. think before you leap!. what is “critical