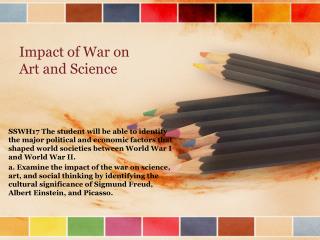 Impact of War on Art and Science

Impact of War on Art and Science - PowerPoint PPT Presentation Impact of War on Art and Science . SSWH17 The student will be able to identify the major political and economic factors that shaped world societies between World War I and World War II.

Impact of War on Art and Science

MILITARY STRATEGY - . part 1. military strategy is a collective name for planning the conduct of warfare . derived from

INFORMATION TECHNOLOGY AND ITS IMPACT ON SCIENCE, CULTURE AND SOCIETY - Lotfi a. zadeh computer science division

Sumerian Society and Science - . standard 1.1 e.q. social changes occurred. kings, landholders, and some priests made up

The West between Wars (1919-1939) - . section 1: the futile search for stability. uneasy peace, uncertain security a weak

HOW SCIENCE CHANGED THE WORLD AGAINST THE ODDS - . dr. shirin haque physics department university of the west indies st

The Art of Teaching and the Science of Learning - . 2011 cte summer institute on teaching &amp; learning. session

The Impact of the Enlightenment - . the arts architecture and art balthasar neuman - church of 14 saints, the residence

Discussions on Operational Art - . the bridge between deterministic combat analysis and the actual complex adaptive