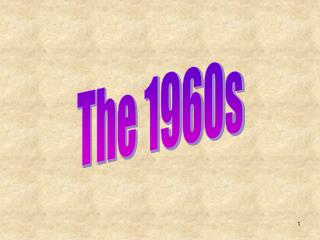 SS310 Unit 3 Seminar: The Camelot Years: Creation of a National Culture - . exploring the 1960s: an interdisciplinary

thalidomide - . health , law and bioethics 2014 by : ana granadeiro. background . the release of thalidomide in the 1950s

Roadside Safety Design - . fall 2013. most of the material taken from: roadside design guide (2011) published by aahsto.

Black Friday - . is it worth it? videth delude. “black friday”. coined in 1960s to mark the kickoff to the christmas

What is Ecology? - . origin of the word is the greek word oikos meaning “household, home, place to live” clearly,

Cultivation Theory - . cultivation theory. developed by george gerbner in the late 1960s, it represented a shift from the

Subcultural Theories - . ▪ several theories emerged from late 1950s through the 1960s ▪ attempt to explain the