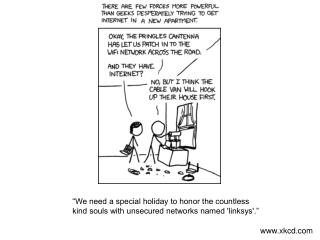 “We need a special holiday to honor the countless kind souls with unsecured networks named 'linksys'.”. www.xkcd.com. “If you're not cool enough to do it manually, you can look up tools like Upside-Down-Ternet for playing games with people on your wifi.”. www.xkcd.com.

XKCD #208 - . courtesy of randall munroe @ http://xkcd.com. logistics. for all graphical qt work, we have a new machine