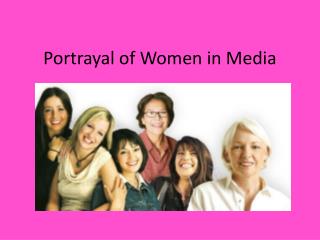 Portrayal of Women in Media

Portrayal of Women in Media. Women. As we unfortunately see in all forms of media, the roles of women in advertising are stereotypical and limiting . The association of women and specific domestic roles has been solidified all over media outlets.

Portrayal of Women in Media

Crisis Management and The Media - . lecture the rwanda tragedy. ‘tribal genocide’. media portrayal in the tradition

AFS 310 Portrayal of African Americans in Film - . a research guide for using websites. let’s review from your

Stereotypical Portrayal of Blacks - . brought to you by kim and camille. 1933 stereotypes. superstitious lazy/slovenly

Number of Media Stories on Internet Problems by Year - Media portrayal of myspace and internet dangers: an archival study

Women in the Media - . by talia bailey. what does the mass media include?. internet television radio newspapers magazines

The Portrayal of Troubled Youth in European Film - . chris balfour. the portrayal of t roubled youth in e uropean film is

RACISM IN THE MEDIA - . a look at how media in america portrays race. table of content. 3. reflection 4. racism on

Women in the Media (Remember?) - . http://www.ted.com/talks/megan_kamerick_women_should_represent_women_in_media.html.

A Portrayal of Portraits - . artists of the times evan sauve. leonardo da vinci. i was born april 15 th , 1452 in vinci,

Death of a Naturalist - . critical essay revision. task. choose a poem which portrays the natural world in a threatening

The Birthday Party - . q. “in the birthday party , although the men are disagreeable, the women are even less likeable

Visible or invisible The image of women politicians in the media Mass media and the redistribution of power - Data: few