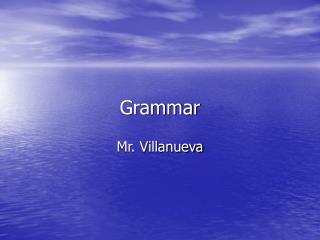 Grammar. Mr. Villanueva. Grammar Review. The test will not ask you directly about the “parts of speech”, but they are important in order to understand Noun : person, place, or thing (dog, New York, OFL) Verb : action word (talk, study, run)

The Grammar-Translation Method - . introduction. objectives of gtm. to be able to read literature written in the target

Chapter 5 Improving your writing: grammar and self-editing - . learning objectives. on completion of this chapter