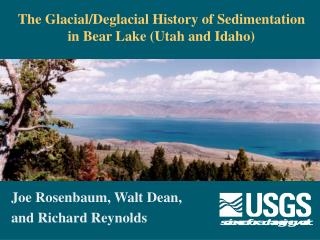 The Glacial/Deglacial History of Sedimentation in Bear Lake (Utah and Idaho). Joe Rosenbaum, Walt Dean, and Richard Reynolds. Interpretations based largely on changes in provenance of detrital material and the transition from siliciclastic to carbonate sedimentation. Catchment Bear Ears Buttes in Utah - Known as bear ears for the pair of purple buttes at the region’s center, the newly

SEDIMENTATION - . introduction. sedimentation, or clarification, is the process of letting suspended material settle by

SEBAL Expert Training - . presented by the university of idaho and the idaho department of water resources aug. 19-23,

External Cause Codes and Their Many Uses in Utah - . cristy sneddon, rhit utah department of health. objectives. external

SEBAL Expert Training - . presented by the university of idaho and the idaho department of water resources aug. 19-23,

The Polar Bear Life Cycle - . by: sanjana ramchandran. birth. cubs are born from nov.–jan. in a den. they stay there

The Yeti - . what does he look like!. very hairy. very strong. 300 pounds. mount everest. glacial lake. relationship with