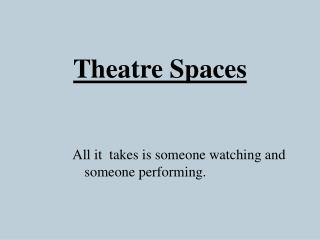 Theatre Spaces. All it takes is someone watching and someone performing. Some of the first formal performing spaces were built by the Greeks. These out door spaces were called amphitheaters and were usually built into a hillside to help the sound from the stage travel up to the seats. Theatre Spaces - . only necessity of a theatre is to have a live audience and actor(s) it does not have to be a building

THEATRE - Performing arts . theatre. techniques. what is the purpose of this unit ?. when you are ready to begin devising

THEATRE - Performing arts. theatre. techniques. what is the purpose of this unit ?. when you are ready to begin

Confined Spaces—Deadly Spaces - . does your site need a confined space program?. failing to recognize the danger is a

Theatre - . part 1. bell ringer . what is a soliloquy? interesting fact: 101 dalmatians and peter pan (wendy) are the

SPACES - . for tomorrow . introduction……. past to now…. what is interior design for me ??. specialism project.

Theatre - . introduction. theatre community rules. examples rules for being a good audience member: -i will be attentive

THEATRE - . part 2 . aristotle’s 3 unities of theatre. 1. the unity of action a play should have only one simple plot,