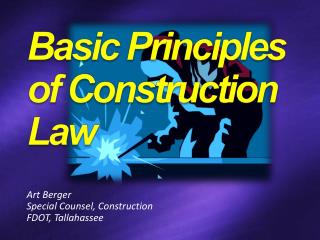 Basic Principles of Construction Law. Art Berger Special Counsel, Construction FDOT, Tallahassee. Contract Law. Formation of a contract:. A contract is a promise or a set of promises for the breach of which the law gives a remedy. The “promise” is referred to as “ consideration .” Tallahassee - . “tallahassee” is an apalachee indian word which means “old town.” . before florida became a

Construction Special Emphasis Program - . overview. in this course, we will discuss: strategy to reduce construction

Tallahassee Veterinary - Pet also grows just like a human kid grows up, they also need proper dental care and for this,

SEO Tallahassee - Search engine optimization is an ever-evolving phenomenon and with every business, the strategy

COUNSEL - . wise people listen to counsel proverbs 12:15 the way of a fool is right in his own eyes: but he that

Lampe Berger - Get the best deals for lampe berger that we have to offer. shop with confidence as we are the very best in