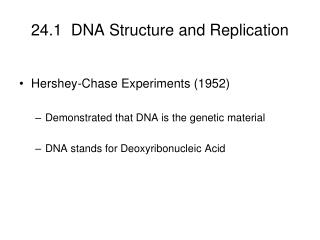 DNA Structure Notes - . qq#1: what do you know about the structure of dna? be as detailed as possible. deoxyribose MUTATION NOMENCLATURE - . summarise the current recommendations for mutation nomenclature at the dna and protein level.

DNA Structure and Replication - . chapter 24. history: hershey and chase experiments. determined that dna is the genetic

DNA Replication and Protein Synthesis - . watson and crick…again. after describing the structure of dna, they released