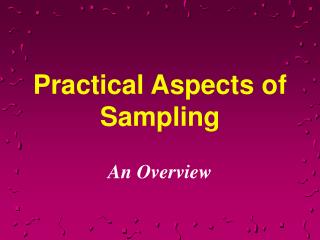 Practical Aspects of Sampling. An Overview. Why Sample?. Why Sample?. Samples are taken to obtain information about populations. Sample estimators are computed to estimate parameters of the the population from which the sample was drawn. Advantages.

Sampling - . sampling – the process of obtaining a sample from a population simple random sampling – sample selected

Sampling - . learning objectives. know and understand the purpose of sampling and analyse the costs and benefits know the

Sampling - . www.educationforum.co.uk. what is sampling?. a great deal of sociological research makes use of sampling .

2.4 Sampling - . to get a perfect set of data, we would survey every person in the population census: obtaining

Sampling - . sampling . sociologist often aim to produce generalisations that apply to all cases of the topic they are

Sampling - . objectives: sampling. to understand: why we use sampling definitions in sampling concept of representativity