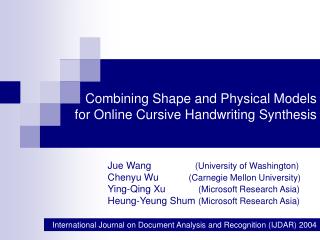 Benchmarking for [Physical] Synthesis - . igor markov and prabhakar kudva the univ. of michigan / ibm. in this talk ….

Cursive - . what is it?. a type of handwriting where the letters in a word are joined. how do i do it?. after learning

Statistical Shape Models - . eigenpatches model regions assume shape is fixed what if it isn’t? faces with

Active Shape Models - . suppose we have a statistical shape model trained from sets of examples how do we use it to