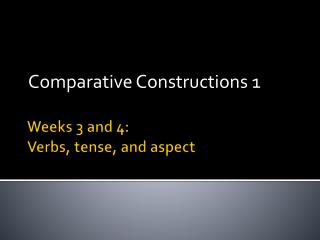 Lecture 5 Verb and verb phrase - . classification of verbs 2. a survey of tense, aspect, voice and mood 3. tense and

Past Simple – Past Continuous - Grammar – part 2 – the past. past simple – past continuous. past simple.

Tense and Aspect I - . what is tense? what is aspect?. tense there are really only two true tenses in english : past and

Choosing the Correct Verb Tense: Past Tenses - . choosing the correct past tense is tricky, too!. how do you choose the

Verb Tenses - . a study guide to fourth-grade verb tenses. the special verb “be”. past tense of “be”: was, were

Grammar for Grade 9 - . episode iv: clauses and sentence structure. four types of sentences. there are four types of

Verb Tenses - . today’s objective: we will identify three verb tenses:. present past future. what is a verb?.

The Tense and Aspect System - . eunseok ro. formal characteristics of the tense-aspect system. distinction between tense

Verb Tenses - . by: mrs. s. irizarry. “on your own”:. is the tense of each underlined verb present, past, or future?