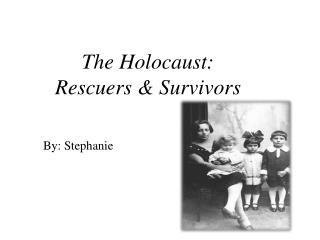 The Holocaust: Rescuers & Survivors. By: Stephanie. SWBAT: Questions students be able to answer…. Who were the victims? What did rescuers do to save the innocents? How many people in total to each victimized nation were killed? What other group of people were placed in the Ghettos ?

The Nazi Holocaust - . extermination of the jews. the holocaust. holocaust is is a greek word that means “sacrifice by

Deaf People and the Holocaust - . &quot;it's a great misunderstanding to think that the holocaust was only about

Holocaust Rescuers - . by: jeremy papuga on the holocaustproj wikispace. a non-jew who helped a jew could be hung or

Photo Stories Of Other Holocaust Victims and Survivors - . a women being sent to be gassed in auschwitz, this is the only

Holocaust Rescuers - . “he who saves one life saves the world entire” rosemary conroy 2009. do not romanticize

Americas and the Holocaust - . quick background of the holocaust. jews were forced into ghettoes and required to wear the

Survivors of the Holocaust - . what do you know about the holocaust?. journal entry. write a journal entry to record your

The Righteous Few: The Rescuers - . the righteous among nations. when governments would not act, brave individuals

The Holocaust WebQuest - . introduction the task the process resources conclusion.

The Nazi Holocaust - . extermination of the jews. standard whii.12b: the student will demonstrate knowledge of the