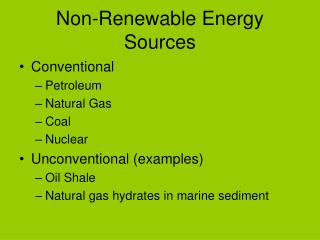 Renewable and Non-Renewable Energy Sources - . humans are very reliant upon electricity . think back to the

Renewable energy sources - . nowadays and predictions for the future. in the last 10 years , the earth warmed up by 1c.

RENEWABLE SOURCES ENERGY - . renewable energy . at the moment, most of the world's energy comes from non-renewable fossil