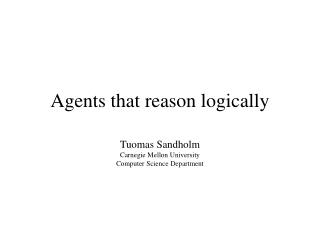 Agent that reason logically - . 지식표현. knowledge base. a set of representations of facts about the world

Agents that Search - . review: how this course will define

Agents that use logic - . knowledge, inference and action in the environment. logic – based agents. reason by inference

The Reason Why Recruitment Agents Are Obliged - Recruitment is very important for the proper growth of the organization.

Agents That Affect Bone Mineral Homeostasis - . functions of the bone: principal structural support for the body ca and

Reason - . objectives. to understand how reason can be used, or misused to justify knowledge claims be able to analyse a