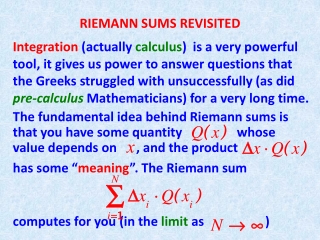 RIEMANN SUMS REVISITED. Integration (actually calculus ) is a very powerful tool, it gives us power to answer questions that the Greeks struggled with unsuccessfully (as did pre-calculus Mathematicians) for a very long time. Riemann Sums - . lesson 14.2. riemann sums are used to approximate the area between a curve and the x-axis over an

Riemann Sums - . approximating area. one of the classical ways of thinking of an area under a curve is to graph the

Riemann Sums - . width of partition:. adds the rectangles, where n is the number of partitions (rectangles). height of

Euler’s Method and Riemann Sums - . looking for insight in the special case of antiderivatives. turning corners (or

Section 3.2 – Calculating Areas; Riemann Sums - . pick up notes out of your folder. represents the area between the

Section 4.3 – Riemann Sums and Definite Integrals - . riemann sums. the rectangles need not have equal width, and the