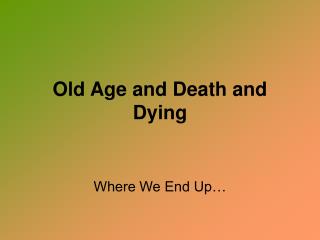 Old Age and Death and Dying Old Age and Death and Dying

The language and symbolism of death and old age in bio-gerontology by John A. Vincent - Bsg annual conference 2006 the

Old age is the stage of life that ends with death. - Old age, sickness, death and immortality : a cultural gerontological

Endings: Death and Dying - . chapter 19 robert s. feldman. what is death?. functional death-absence of heartbeat and

he Puritans on Death and Dying - . timeless wisdom for today’s christians: an introduction to the puritans. review of

CHAPTER 17 THE FINAL CHALLENGE: DEATH AND DYING - . learning objectives. how is death defined? why is the definition of

Adulthood and Old Age - . chapter 5 introduction to psychology. what is adulthood?. the period of time in your life after

The death of email has been greatly exaggerated - Email marketing. is it on its deathbed; an ancient channel that has no