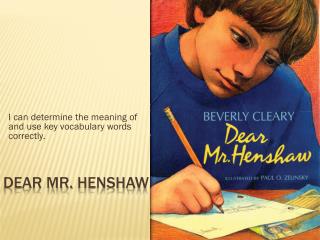 I can determine the meaning of and use key vocabulary words correctly. Dear Mr. Henshaw. d iary (noun). She goes home every night and writes in her diary. d iary (noun). a daily record or journal. d isappointed (verb). The player was disappointed when his team lost the game. Dear Mr. Blueberry - . pictures and story by simon james. simon james was born in bristol, england, in 1961. when he was

Dear Mr. Henshaw Vocabulary - . mobile home. a mobile home is a trailer used as a permanent home. duplicate. b eing

Dear Mr. Winston - . vocabulary. fault noun. when you are at fault, you have made a mistake. fault . after the argument

Dear Parents: - Student behavior highly impacts the learning environment in the classroom. we use positive reinforcement

Dear Mr. Henshaw - . by. book characters. setting of story. leigh’s problem. lee has several problems to solve in the

Dear Mr Thomson, - I have opened a file on our new client , mr hendricks . the file contains the intake memo , fee

Dear Mr. Henshaw - . by: beverly cleary book report by: danny mahoney. setting. the setting of my story is in his room

Dear friends - Oswaldo, carlos, ruben &amp; javier are 4 colombian brothers that have suffered the unbelievable, due