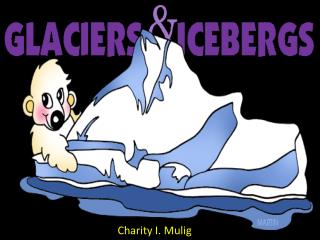 Charity I. Mulig. Definition. A glacier is a thick mass of ice that forms over land from the compaction and recrystallization of snow and shows evidence of past or present flow . Types of Glaciers . Valley/Alpine Glaciers.

Earth Science - . challenge to excellence. nail rusting. big question!. which nail will rust the fastest? the one in the

Introduction to Earth Science - . charity i. mulig. what is earth science?. encompasses all sciences that seek to

Soil Erosion - . charity i. mulig. soil erosion is the ultimate fate of practically all soils. but soil erosion proceeds

Minerals - . charity i. mulig. definition. a mineral is a naturally occurring inorganic solid with a definite chemical

Mary Mackillop - . birthday of mary mackillop . was born on 15 january 1842 in fitzroy, melbourne. parents of mary.

Soil: One of Our Natural Resources - . charity i. mulig. soil. the portion of regolith that can support plant growth.

Charity I. Mulig - . definition. a glacier is a thick mass of ice that forms over land from the compaction and

Introduction to Earth Science - . do now!!!!. definition. four branches of earth science. the study of earth and the