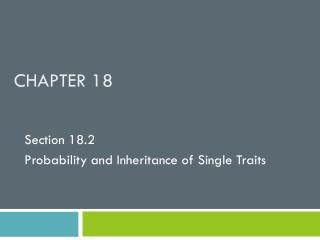 Chapter 18. Section 18.2 Probability and Inheritance of Single Traits. Phenotypic Ratios. A phenotypic ratio is the ratio of offspring with the dominant trait to the recessive trait. A phenotypic ratio can be expressed as a decimal, a fraction or a percentage. Ex. Chapter 18 - . the federal gift and estate taxes. the big picture (slide 1 of 3). over his lifetime, peter hood started

Chapter 18 - . renal failure. section i . introduction. kidneys are the principal excretive organs. not only excrete

Chapter 18 - Price setting in the business world how are prices set by business people? costs provide a price floor. see

Chapter 18 - . other nonretirement benefits. can be divided in three categories. payments for time not worked extra

Chapter 18 - . classification. evolution has lead to a large variety of organisms. biologists have identified and named

Chapter 18 - . classification. section 18-1: history of taxonomy. taxonomy is the branch of biology that names and groups