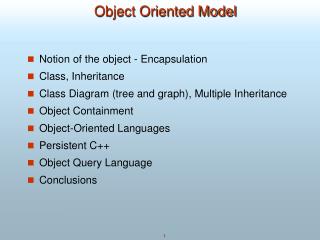 Object-Oriented Database Management Systems - . the goal of all inanimate objects is to resist man and ultimately to

Visual Basic: An Object Oriented Approach - . programming is a model of the real world object in real world modelled as

Structured Vs. Object Oriented Analysis and Design SAD Vs. OOAD - . software process model. modeling. a model is an

Why do we need an “Object Oriented Model” ? - . martin doerr. institute of computer science. foundation for research